The title is a bit double today, i was deployed back from india to home and I will explain how you can deploy to your Rhapsody project and not lose the “roundtrip” feature!

The purpose is to deploy and leave all files exactly where Rhapsody has generated them so that you are still able to do roundtripping.
It is not completely straightforward but certainly doable.

The trick is to map the “Generated Model” directory to the “MyConfiguration” Directory. Depending on the age of your deployer this is very easy, easy or just a bit of work….

Then move the project file (or the complete project if you have already content in it) to the MyComponent directory, start the Deployer Configuration (In Rhapsody under “Tools”) and select the just moved project file.

Deploy back the traveling modeler

Now that turned out to be a lot more difficult… The planning was to fly home on Sunday Evening. Or technically on monday morning, the flight from Delhi to Paris would leave at 00:15 Delhi Time, 19:45 CET ) I had a late flight (19:30-21:50)  from Hyderabad to Delhi and so less than 1,5 hours for my stop-over. From the trip to India I had learned that this was not nearly enough.
At first I thought, well lets just see what happens but since I did not book the flight as a complete flight, missing the plane from Delhi (to Paris) would not be an option.
So I checked the goindigo.in website and I found out I had been clever enough to book a flight with rebook and cancel options. Yeah….
So I rescheduled that flight to be early enough (16:00-18:25) That would be more than enough.
So I left the hotel exactly at 12:00 (CET: 7:30 Sunday )packed and paid. On my way home! I took a Uber to the airport, that was almost an hour drive ( and almost €8.- )

There I tried to figure out where I had to be. That is not too easy, the airport did not make announcements and I was pretty early so my flight did not yet show up on the monitors. But I could check in my luggage (I had booked the Fast Forward Option, a good idea in India…) quite fast. I did not have to stand in line.
So I was there hours too early but hee… better than 1 minute too late…. Spend some time shopping for home, drinking a Mango Lassi, eating something.
The plane left in time and flew on-time. My suitcase was in-time, the bus was easy to find and even waited for me so I was on the correct airport terminal early. checked in my suitcase within an hour of landing…. So it is possible.
But I seriously doubt if that is reproducible, So i did not mind being early. What I did mind is that just before boarding time, Air France started to make announcements about delays.

The plane was delayed. For more than an hour. Not cool, my connection in Paris was only 1:20…. not too long.
The plane left too late but promised to make up for lost time. It was an old Airbus 330. Also no USB chargers and very limited seating room for a continental flight..
On top of that the two ladies in front of me immediately reclined their seats the moment the “Fasten your Seatbelts” light went of. Sigh.

Next to me sat an old lady, very friendly but she only spoke French. i do speak a little French but not nearly as much as English or German… This was going to be a long flight.
Normally (I’m used to KLM) on long flights, you first get a drink, then dinner, with drinks and another drink or coffee after dinner. Then the lights go out and you can sleep (if you like) Air France pushed out drinks together with the food as fast as possible.
The ladies in front of me continued “sleeping” and did not eat. And refused to put her chair back. So I had about 30cm for my food. Thanks!
I managed to eat and drink that without accidents and noticed that there was not going to be anything more to drink or eat.
The ladies in front of me thought that this was the right time to change their minds and to order food and drinks. Thanks!
Chairs were kept in the sleep position, of course.
I got my earplugs and my face-mask and prepared to sleep. At take-off the family in the middle row, 2 rows before me already had trouble with their 3 kids but as soon as the lights went out the kids decided that it was time to start waking up the other passengers. Thanks!
The seats in the old A330 were clearly out-dated. So with a back that hurt, no sleep what so ever I ate my breakfast. The pilot had broken his promise and did not make up for the lost time so I would arrive an hour late in CDG, not really my favorite airport..
Flight attendents could not give much information, just that we landed on terminal 2F and that I had to go to 2E. Sounds close, but I know CDG, it is not close…
I gathered my luggage before the landing so I could run out of the plane fast, I even ignored the ladies in front of me and as soon as the plane was stopped I ran to the door. There I waited until it opened and I started my morning sport… I had less than 20 minutes but…. I made it! In spite of passport check and even a security check (WHY???) that cost me my water (grrr) I made it to the plane in time.
I crashed in my seat, luckily here there were some better tempered passengers, they had fun about me sweating and panting.
I didn’t care, I made it in time. I was pretty sure that my suit-case would not but I did not care. Air France would take care of that.

And then the pilot announced that we would have some delay because of the fog in the Netherlands… To make a long story short… that took 3,5 hours. Leaving the plane was not allowed (They would not let you in again…. many passengers with connecting flights left because they would not make their flights) so I stayed. There was water and a sandwich and finally we took off.
I arrived at Schiphol around . I thought: well there is a sunny side: My suitcase has made it now: not. CDG was not able to adapt. So I waited at the luggage belt for nothing. Then to KLM, report missing luggage, then the train home. I arrived home at 5:30pm, 32 hours after I left the hotel… 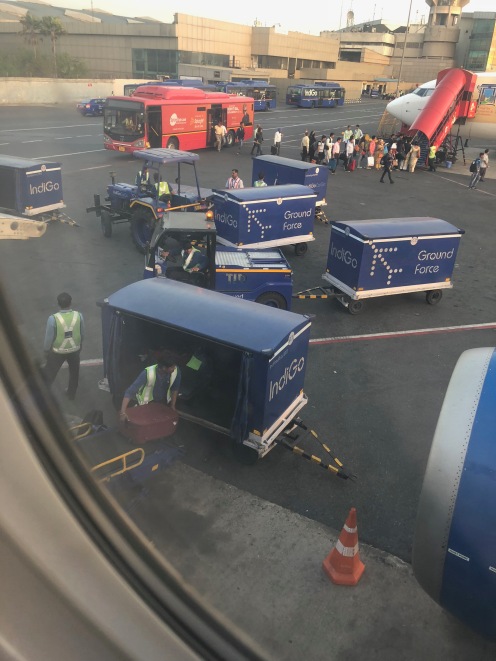 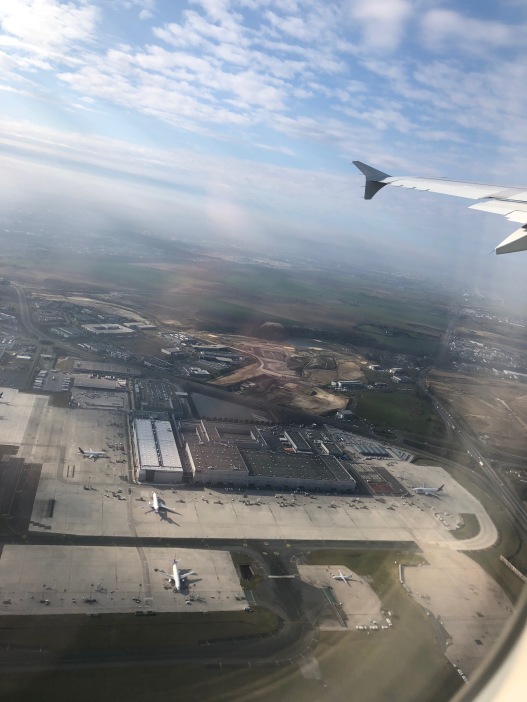 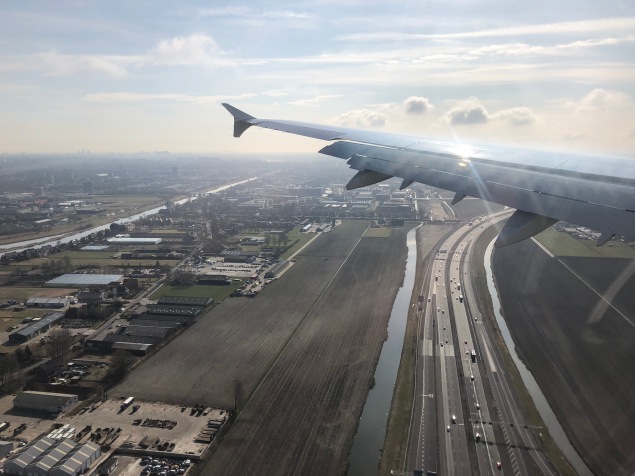